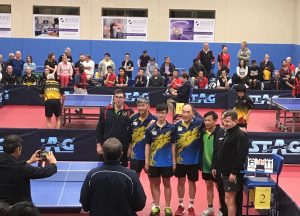 The Adelaide Club had 4 teams  that made the Grand Final in their respective grades and that played in the “Super Saturday” which was an excellent result. Congratulations to David Liang, Royce Goh and K C Tan for winning the State League Reserve team premiership (see photo).
The State League team of Keyman Liang, Mitchell Rogers and Wilsen Wang narrowly lost their grand final 5 -4.
The Division 2 team of John Tomas, Jasmine Fung, Sai Pongasathorn and the Smash Hit team of Hadrian De Palo, Will McCormack, Edvardo Frasseto also lost their grand finals, however, it was a great effort throughout the year to make the Grand Finals.

Thank you to all Club Members who represented the Club in their respective grades in helping to make the 2019 TTSA Winter Pennant Season a success.

The Adelaide Table Tennis Club will be closed over the Festive Season. The last day-time ...
Read More →

The Saturday Morning 'Smash Hit' junior coaching of the 2nd November 2019 had a special ...
Read More →